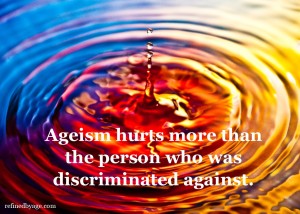 Nine of a nine-part series of articles on ageism.

The sun was melting the frozen winter landscape and turning it a dirty white. By all appearances, Spring would arrive early this year. The promise of better days was in the air – but not for everyone.

John was struggling financially, mentally and emotionally. It seemed the dark days of winter dogged him regardless of the increasing daylight. It was his second year of early retirement at 55 years of age; a retirement initiated by the stress and organizational changes in his lifelong career.

John and his wife put their house in South Dakota up for sale. They moved to the lake cabin in Minnesota they loved, in large part to help care for Elaine’s ailing parents. John found it a struggle to keep up two homes on his retirement income, especially during the winter, and began to earnestly look for work. He applied everywhere he could think of within a 30-mile radius of their lake home.

It seemed there was no place for a man in the workplace who was 55 years of age and retired from a career he had been in most of his life. Try as he might, doors would not open for him. To complicate matters, his home in South Dakota had been on the market for a longer than normal amount of time, tying up much-needed resources.

John’s undiagnosed depression had been growing since he separated from his job. He was a company man. The bulk of his identity was tied in with his career. Retirement was a time that he imagined to be liberating. Instead, he found himself grieving the loss of meaning and purpose in his life, while at the same time struggling to make ends meet financially.

He had not experienced winter at the lake home before this. It was an entirely different world than the one he was accustomed to in the summer. The deep greens of the woodlands surrounding the sparkling diamonds dancing on the blue lake turned into a stark, frozen winter white. The neighbors were, for the most part, gone as most cabins in the area were not winterized. There was a stifling, almost suffocating isolation that closed in on him compared to his people-oriented career.

He realized his retirement dream was turning into a retirement nightmare. It was a nightmare that hit him upon waking, so he began spending more and more time trying to escape the nightmare by sleeping. Sleeping was an escape for him, but his lack of activity and sunshine added to his lethargy. He was caught in a whirlpool that was sucking him down. Everything seemed out of his control and was growing more unbearable each passing day.

Finally, feeling so out of sorts, he made a trip into town to see a physician. Being new to the area, the doctor wasn’t familiar with him. In fact, this was the first time he had seen him. He was a family practitioner who didn’t recognize the depression in him. They went over his medications thinking one of them might be the culprit for his symptoms.

A few days later, John and his wife were invited into town for their grandson’s sixth birthday party. When they arrived around noon, he dropped his wife off and told the family that he was going to get a quick oil change in the car. He never returned.

His daughter called every gas station in town and not one of them had changed oil for a man by his name that day. Everyone in his family was beside themselves with worry because he was the most prompt, dependable person around. What could be wrong?

Something was, indeed, wrong. The daughter called one of the few neighbors who lived on the lake in the winter to have him check to see if John had returned to the cabin. The neighbor found her father unconscious on the floor of the woodshed and called an ambulance. They were told by the medical facility that he had died of a self-inflicted gunshot wound to the head.

His pain ended there on that brisk March day, but the shock and overwhelming grief of his family continued well into the months and years that followed. A six-year old’s birthday was ruined on that day and forever bears the scars of a family tragedy.

John’s daughter cried so hard over his death that she went into labor and gave birth to a baby girl who was a few weeks overdue. When she was discharged from the hospital, she found she was now a caregiver to six people instead of two: a newborn daughter and two sons aged two and six, her mother who was hospitalized for depression of her own after the tragic loss, and her two ailing grandparents.

Her brother flew home for the funeral and discovered a grizzly truth about suicide. The paramedics remove the deceased, but the family is left to clean up whatever mess is left. The cleanup proved to be more difficult than he could bear, so he burned the woodshed to the ground. A day later while the ashes still smoldered, he had a pastor visit the site to bless the partial remains of his father that were cremated with the shed.

John’s house in South Dakota sold one week after his untimely death.

John was my father. He was a victim of ageism.

I have worked in the aging field for over 29 years, serving on initiatives at the national and international levels. I want to help people become "Refined by Age" by encouraging them to age intentionally through developing the Seven Dimensions of Wellness in their lives: spiritual, emotional, physical, intellectual, social/cultural, environmental, vocational. I also want to help people become aware of age discrimination - a form of discrimination that is entrenched in society.