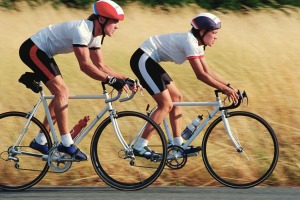 “Life is like riding a bicycle. To keep your balance, you must keep moving.” This quote is credited to Albert Einstein, Nobel prize winner and brilliant theoretical physicist, who lived to be 76 years old. He was born in 1879 and lived until 1955 when the lifespan for men was only 66.7 years and 72.8 for women. Assuming he practiced what he preached, his active lifestyle helped him live nearly a decade longer than the average life expectancy for a man in 1955. I’ll take an additional 10 years of life if it means modifying my lifestyle. Who wouldn’t? The sad answer to that question is, millions of people.

We are experiencing an obesity epidemic that is potentially shortening the lives of millions of Americans. Obesity began to be a problem in 1980 when everything was super-sized which made people think they were getting more for their money. Boy, were they! Along with their increased girth they were also receiving an increased risk of sleep apnea, gallstones, high cholesterol and triglycerides, stroke, coronary artery disease, high blood pressure, type 2 diabetes, to name a few.

After attending a recent seminar, a friend of mine commented that the doctor who gave the presentation told everyone in attendance that they were all overweight. She pulled no punches and made a few lasting impressions during her presentation. Let’s hope she moved people to action – to begin changing their eating habits and level of activity. When there’s as much at stake as there is by living an overweight lifestyle, it’s best to tell it like it is. People’s lives are virtually at stake!

Not only is the over-eating epidemic claiming lives, but sedentary lifestyles are adding to the obesity epidemic as well as falls among older adults. According to the Centers for Disease Control and Prevention, “each year, one in every three adults age 65 and older falls. Falls can cause moderate to severe injuries, such as hip fractures and head traumas, and can increase the risk of early death. Fortunately, falls are a public health problem that is largely preventable.” Getting enough physical activity to maintain strength and balance is one of several key components of avoiding falls and maintaining a healthy lifestyle. According to the American Heart Association, adults should get:

I’ll end with a personal anecdote pertaining to weight loss, so you can see that I don’t just preach. I have led a very sedentary lifestyle the past few years due to health reasons and was combining that with comfort foods; a deadly combination. My husband who is in the health care field suggested to me that although there were many things I couldn’t control in my physical dimension – I could control what I ate. Through the help of some specialty diet foods as well as making wiser choices when dining out or snacking, I lost 35 lbs. and four sizes in a few months. Despite the fact that I had to buy new clothes, I feel much more in control of my physical dimension than I have in a long time. Toning up this new me is next, after what is hopefully my final surgery for a very long time.

If you are overweight or feel like the physical dimension of your life is in need of an overhaul, start small, but start somewhere. There are many ways to lose weight; not all of them healthy or appropriate for you based on your health conditions. Talk to your doctor to see what’s right for you before beginning a new lifestyle; including diet and exercise.